Click “Whisper” on a comment below and send a private message to someone. Want to know how that works? Read on.

I’ve talked before about our forum software in Three Generations of Forum Software: How the meh.com forums (with lazy loaded images) are the fastest forums we’ve ever built and how we dodged creating a sticky thread feature in Introducing: Broadcasts.

Today I wanted to share a new feature we’ve built that will help casemates.com users share personal information when splitting cases of wine without the usability problems of traditional private messaging.

What are the usability problems of traditional private messages? Glad you asked.

I’m sure you’ve seen this sort of thing before.

Very common, especially back in the days of Wine.Woot for our exact use case of splitting cases of wine.

I wonder what percent of private messages also ended up causing a public comment to be posted.

Might seem harmless, but I promise it can get out of hand. 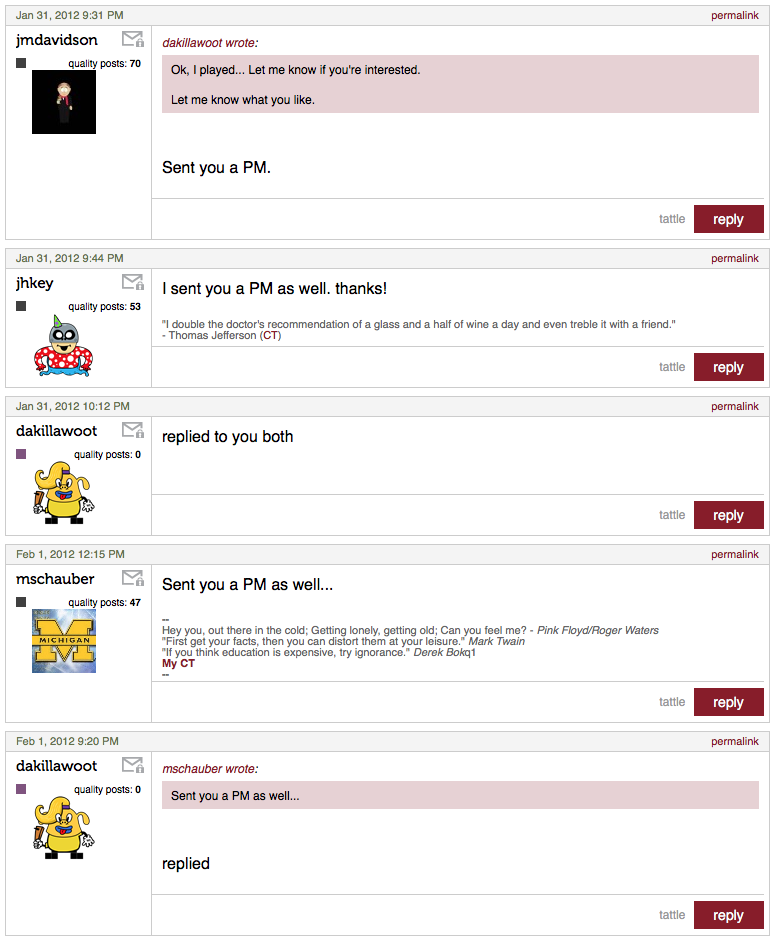 Issue 2: “How do I use private messages” spam 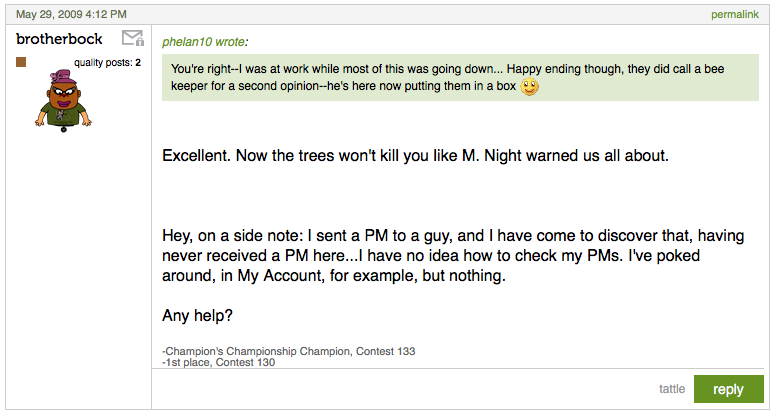 Issue 3: What were we talking about again?

Ok, you’ve discovered that there’s private messages, you’ve been alerted in the public forum that someone sent you a private message, you’ve figured out how to check private messages, and you’ve learned how to send one… but in most forum systems you’re in a completely separate and isolated area of the site.

We’d rather remain closer to the topic already in progress rather than being forced to jump to a new section of the site and losing the context of the discussion. We also don’t want to have to jump back and forth between public and private conversations about the same topic. 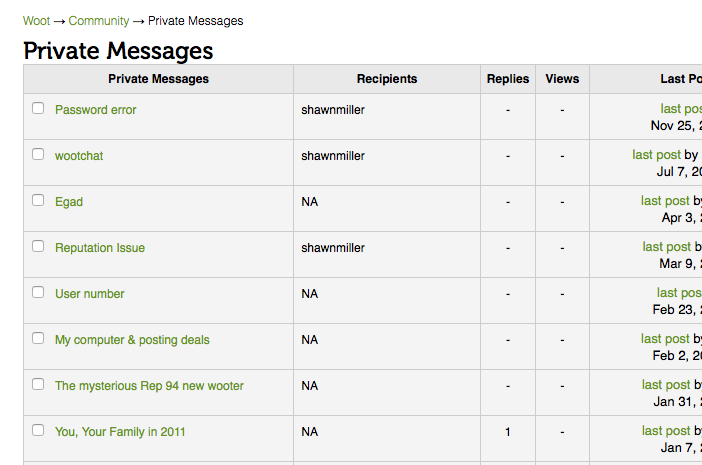 We want to share cases of wine with a few different people so we need our private messaging system to not be limited to trading messages with a single person.

After an attempt at designing a traditional private message system and trying to somehow solve for the issues outlined above we realized old school Internet Relay Chat (IRC) already had the answer.

While the IRC specification didn’t seem to have an official /WHISPER command many clients described the /NOTICE command using the term “whisper” which we thought was a pretty damn great name for this feature.

/NOTICE {nickname|#channel} {text} Sends a private message to the specified {nickname} or {#channel}.

The NOTICE command is just another way to send messages to other people. But, unlike MSG's, NOTICEs will never open a separate window 'to' the other person. It should be seen as a sort of whispering.

The best part about whispers is that they work almost exactly like replies which provides us with a few big advantages over private messages.

Because whispers show up inline on the topic page they solve issue #1 (“sent you a PM” spam), issue #2 (“how do I use private messages” spam), and issue #3 (what were we talking about again?).

Because you can add a few users to a single whisper they solve issue #4 (many private message systems are one-to-one).

Because whispers are integrated as a native part of our forum system they work exactly like you’d expect. You format content using Mehdown (our open source Markdown parser) just like topics, comments, and replies. You can “like” a whisper by clicking the star icon. You can edit and delete whispers during the five minute edit window. You’ll see the unread indicator when you visit a topic that has new whispers posted since your last visit. Whispers will honor custom pagination settings. 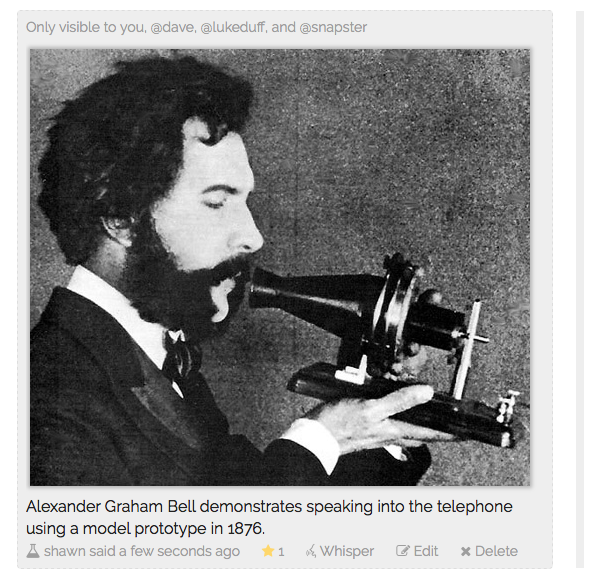 Whispers are also sent to the specified users via email following a similar set of rules as comments and replies. That is to say emails are sent after the five minute edit window has closed and only to users who have not viewed the topic since the whisper was created. We never send emails to anyone outside the specified users being whispered to regardless of those mentioned by @username in the body of the whisper or those subscribed to the topic. 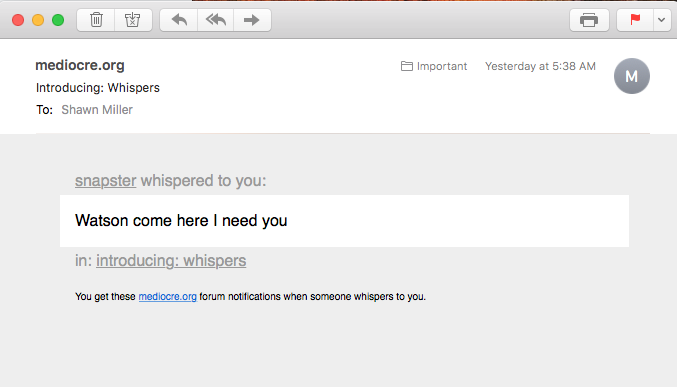 It’s important to note that this is the primary way we expect you to notice you got a whisper. You’ll want to make sure you’ve got email forum notifications turned on here: https://casemates.com/account/email-subscriptions

First, there is an icon to start writing a Whisper that exists alongside the Reply icon. However, you won’t find the Reply icon itself on a Whisper. This is to prevent responding to a whisper with a public reply accidentally.

A quick note about privacy: whispers are not readily accessible to general staff or moderators. Also keep in mind the users you’re trading whispers with can easily copy/paste this data. No credit card numbers please.

Second, posting a whisper does not change the topic’s most recent activity data. That is to say on the forum index page the number of posts remains the number of comments and replies and does not include the number of whispers. This also means that the last activity of the topic only reflects public activity and the unread indicator does not consider any whispers that have been posted.

However, the number of whispers that are visible to you is available on the topic page.

Even with those couple of limitations we think you’re going to enjoy whispers more than a private messaging system. We’ll continue to improve whispers as we learn how they’re being used but this feature set as-is should provide some better tools for splitting cases.